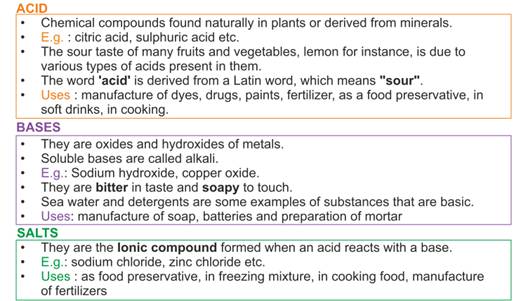 Indicators tell us whether a substance is acidic or basic by change in colour. There are some substances whose odour changes in acidic or basic media. These are called olfactory indicators.

REACTION OF ACIDS AND BASES WITH METALS

Reaction of acids with metals

the metal in the above reactions displaces hydrogen from the acids. This is seen as hydrogen gas. The metal combines with the remaining part of the acid and forms a compound called a salt. Thus,the reaction of a metal with an acid can be summarised as –

Reaction of base with metal

Reaction of Metal carbonates and Metal Hydrogencarbonates with Acids

Reaction of Acids and Bases with each other

Reaction of Metallic Oxides with Acids

Acid or  Base in a Water Solution 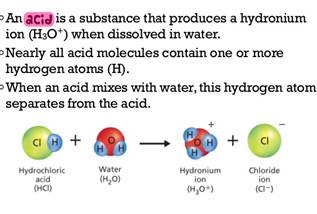 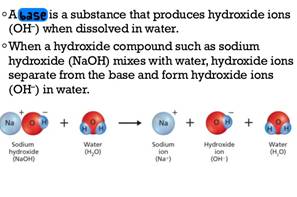 A scale for measuring hydrogen ion concentration in a solution, called pH scale has been developed. The p in pH stands for ‘potenz’ in German,meaning power. 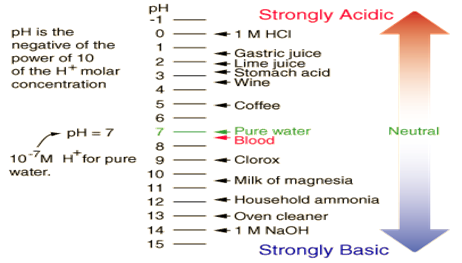 When electricity is passed through an aqueous solution of sodium

chloride (called brine), it decomposes to form sodium hydroxide. The

chlor for chlorine and alkali for sodium hydroxide.

The chemical name of the compound is sodium hydrogencarbonate (NaHCO3). It is produced using sodium chloride as one of the raw materials.

Another chemical that can be obtained from sodium chloride is

One other salt, which possesses water of crystallisation is gypsum.