• We use various materials for our basic needs. Some of them are found in nature and some have been made by human efforts.

• Air, water, soil and minerals are obtained from nature and are called natural resources.

• We cannot use all our natural resources forever.

• Inexhaustible Natural Resource present in unlimited quantity in nature and are not likely to be exhausted by human activities.

• Exhaustible Natural Resources are limited in nature and can be exhausted by human activities.

• Exhaustible natural resources like coal, petroleum and natural gas are formed from the dead remains of living organisms.

• Coal is as hard as stone and is black in colour.

• Coal is one of the fuels used to cook food.

• As coal contains mainly carbon, the slow process of conversion of dead vegetation into coal is called carbonisation.

• Coal is also formed from the remains of vegetation therefore it is also called a fossil fuel.

• Coal is processed in industry to get some useful products such as coke, coal tar and coal gas.

• Coke is a tough, porous and black substance. It is almost pure form of carbon. Coke is used in the manufacture of steel and in the extraction of many metals.

• Coal tar is a black, thick liquid with unpleasant smell. It is a mixture of about 200 substances.

• Products obtained from coal tar are used in everyday life and in industry, like synthetic dyes, drugs, explosives and perfumes.

• Nowadays, bitumen, a petroleum product, is used in place of coal-tar for metalling the roads. 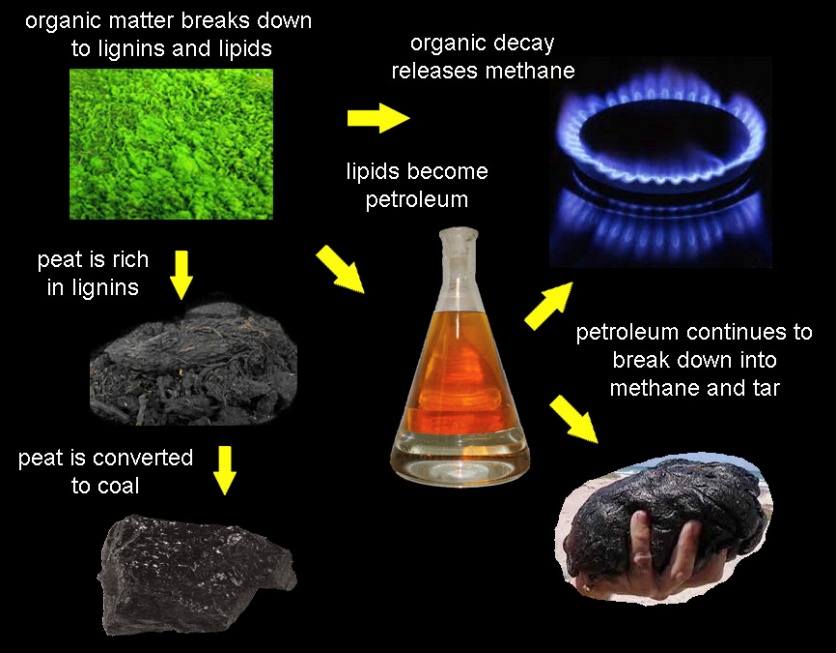 • Coal gas was used for street lighting for the first time in London in 1810 and in New York around 1820. Nowadays, it is used as a source of heat rather than light. 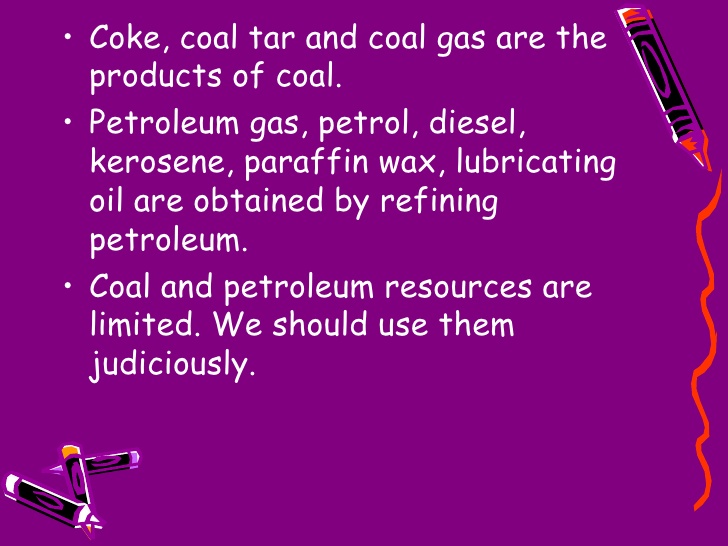 • Petrol and diesel are obtained from a natural resource called petroleum.

• Over millions of years, absence of air, high temperature and high pressure transformed the dead organisms into petroleum and natural gas.

• In India, oil is found in Assam, Gujarat, Mumbai High and in the river basins of Godavari and Krishna.

• Petroleum is a dark oily liquid. It has an unpleasant odour. It is a mixture of various constituents such as petroleum gas, petrol, diesel, lubricating oil, paraffin wax, etc. 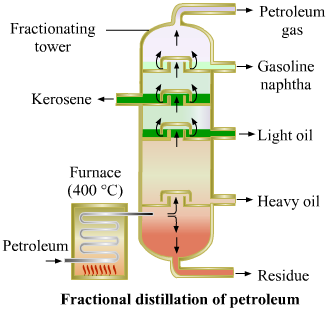 • Many useful substances are obtained from petroleum and natural gas. These are termed as ‘Petrochemicals’.

• Hydrogen gas obtained from natural gas, is used in the production of fertilizers.

• Due to its great commercial importance, petroleum is also called ‘black gold’

• CNG is used for power generation. It is now being used as a fuel for transport vehicles because it is less polluting. It is a cleaner fuel.

• Natural gas is also used as a starting material for the manufacture of a number of chemicals and fertilizers.

• In India, natural gas has been found in Tripura, Rajasthan, Maharashtra and in the Krishna Godavari delta.

• Coal and petroleum are fossil fuels.

• Burning of coal and petroleum is a major cause of air pollution.

• Coal and petroleum resources are limited. We should use them judiciously

Prev Conservation Of Plants And Animals
Next Cell Structure And Functions