Chapter 1 – Matter in our surroundings

“Panch Tatva”, air, earth, fire, sky and water. According to them everything, living or nonliving, was made up of these five basic elements.

Characteristics of Particles of Matter:

PARTICLES OF MATTER HAVE SPACE BETWEEN THEM

PARTICLES OF MATTER ARE CONTINUOUSLY MOVING

PARTICLES OF MATTER ATTRACT EACH OTHER

Particles of matter have force acting between them. This force keeps the particles together. The strength of this force of attraction varies from one kind of matter to another. 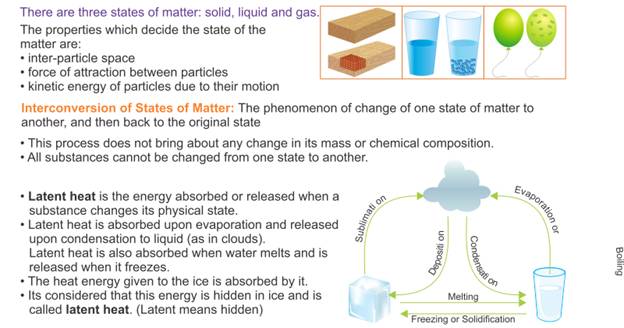 Plasma: The state consists of super energetic and super excited particles. These particles are in the form of ionised gases

Bose-Einstein Condensate:  The BEC is formed by cooling a gas of

Next Chapter 2 – Is matter around us pure